If you are a connoisseur of bookstores, like I am, then you might find this to be an unusual post, because despite my previous posts praising the shining stars of the indie book world — mainstays like Kepler’s in Silicon Valley, Powell’s in Portland, Elliott Bay Book Company in Seattle, and The Strand in New York — I am now going to praise a new type of bookstore on the scene.

Years ago, Hugh Howey made some great points about why more physical bookstores — even ones created by Amazon — would be a good thing for the larger marketplace of books, and would create a larger reading base overall. 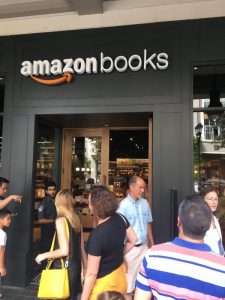 Like writer Hugh Howey, I love Amazon’s new physical bookstores. They’re located in major metropolitian areas, where readers tend to collect and form bookish communities. And these bookstores are amazingly focused on creating the very best readerly experience ever. Hugh Howey has posted a longer piece on his experience with Amazon bookstores. I’m with Hugh, I think these bookstores will definitely move the needle in a positive direction for people who love books.

Here are a few reasons why I love Amazon’s new bookstores so much. There are comfort-and-reading reasons, and there are commercial reasons, and finally, there are literary reasons. Let me enumerate them one by one.

First, it’s obvious that Amazon Bookstores are employing people who know books well and love books. One of my local indie bookstores is an absolute dream — I love Browsers, and I shop for books there every single week. I know all the staff, and they even pick out books they know I will like. However, I’ve been in bookstores where I am treated like I am an intrusion (I will not name the bookstore). Books are mis-arranged and no one seems to care. They don’t know their local authors. They don’t know their stock, and they don’t seem to really care about building a bookish community. Although Barnes & Noble tries harder (surprisingly), I’m saddened to see their books section gradually getting taken over by other kinds of merchandise.

At Amazon Bookstores, the opposite is true. When I enter the bookstore, I’m greeted by people who clearly know their stock, all the books are face out and easy to read, and they are arranged in “similarity” queues, so if I’m looking for a certain kind of book, I can easily find it. Every book has a review posted, and every book is arranged for optimal scanning. There are troves of books that are good discoveries near at hand, and there is everything I’m looking for in a bookstores. It’s a pure reading pleasure at Amazon Bookstores, and I will be going back many many times. 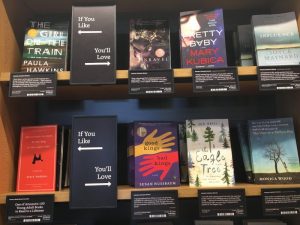 Second, there are ethical reasons to go with Amazon as a publisher and a retailer. Although there are legitimate questions about a warehouse culture and how they’ve taken over Seattle, there are also good things about Amazon. To start with, as an author, I’d argue that they have essentially saved America from the tyranny of the Big 5 publishers. I know my way around book contracts, and I’ve turned several down because they were seizing IP rights, and treating authors like dirt. Furthermore, their editors were over-worked, under-paid and even ignorant about other imprints within their own publishing house.

It’s important to note that Amazon’s Kindle Unlimited and Kindle Publishing efforts lit a fire under the nascent world of self-publishing, and have made it possible for many authors to make a living across many domains, from Kathryn Le Veque’s wonderful medieval romances to Hugh Howey’s science-fiction writing. (One wonders why no traditional publisher did this first?) I’ve even put my toe in the water here, self-publishing a few science fiction and horror short stories, and I’ve learned the ropes on self-publishing. My longer novels have been published until recently with smaller traditional publishing houses. However, with my novel The Eagle Tree, I signed with a traditional publishing house owned by Amazon Publishing because their contracts were very fair (David Vandagriff reviews all my contracts), and their editors were absolutely a dream to work with. (I won’t even mention the fact that up until 2015, a traditional big 5 publisher put female authors of color in their own ghetto) Amazon publishing definitely lifts up editors, writers and voices of all genders and backgrounds. 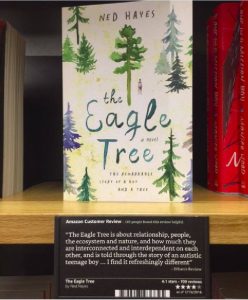 Third, for me there were personal commercial reasons to go with Amazon publishing. You might disagree with these reasons, but the data speaks for itself. The high level takeaways are that Amazon now accounts for up to 79% of all ebooks. Furthermore, it’s not just in ebooks that Amazon is making an impact. The data demonstrates that Amazon is now gaining enormous ground in print book sales, at the expense of Barnes & Noble and big-box retailers primarily (note that indie bookstores are indeed resurgent, which is one thing that my little series on bookstores celebrates!). In fact, up to half of actual printed book sales in the United States are now sold via Amazon. The reach and impact of Amazon is impossible to over-estimate for authors. Amazon knows how people read, and how to reach these readers. That’s why the promotion efforts and publicity that Amazon made so much sense to me, and helped to propel my novel The Eagle Tree to national bestseller status.

Finally, it’s clear to me that the literary community writ large has failed the reading public. There’s a real problem when we have a WASP-set of New York City based literati pushing a certain type of Philip-Roth style fiction on the reading public as the highest standard, when the majority of the reading public doesn’t read that kind of fiction. This is a problem for readers, it’s a problem for writers who want to make a living and most of all, it’s a problem for the sustainability of literature. Stephen King has pointed this out multiple times. So have romance authors (who constitute over 50% of all books sold), and science-fiction authors (who sell much better than literary fiction). Hugh Howey, a former bookstore employee and bestselling author, described this situation well in a post:

Part of the problem is that the major publishers ignore the genres that sell the best. This is a head-scratcher, and it nearly caused a bald spot when I was working in a bookstore. I knew where the demand was, and I wasn’t seeing it in the catalogs. Readers wanted romance, science fiction, mystery/thrillers, and young adult. We had catalogs full of literary fiction. Just the sort of thing acquiring editors are looking for and hoping people will read more of, but not what customers were asking me for.

Amazon Bookstores get this big important thing about how people actually read. They use all the reams of data at their disposal to curate a selection of books that are actually of interest to people who actually read. Amazon Bookstores don’t distinguish between some author who received a seven figure advance from some publishing house for his memoirs of picking his nose in Manhattan, or a self-published fantasy author who happens to write about elves and dragons and lives in Montana. They stock the books that people read. 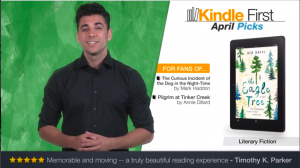 There’s a side question, of course, about whether or not we should treat books as “vegetables” or “dessert.” This little metaphor is meant to illustrate the canard that is sure to rise once I state that we should democratize literature (which is essentially what Amazon Bookstores do for the curated and carefully chosen books on their shelves). Books should be read because they are good for you and improve the world, not just because you enjoy them or are entertained by books. Books should be vegetables — you should read them — not just dessert. I think there’s a middle ground, which is that books can nourish and sustain you, and also be an excellent read. Donna Tartt proved this with her books. So has John Irving. So has Toni Morrison. All of these writers know how to tell a rip-roaring fast-moving story that holds their readers enthralled, yet still communicate deeper, darker, more meaningful truths. These kinds of books are well represented at Amazon Bookstores.

If you love bookstores, you owe it to yourself to visit your local Amazon bookstore and determine for yourself if Amazon is making things better for readers and writers.