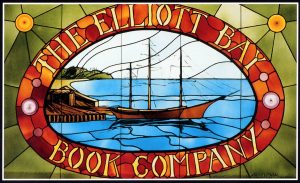 I fell in love with the Elliott Bay Book Company at first sight. I was in college, and I was visiting on a “Literature and the Arts” group trip. The classic old-Seattle brick building, the funky Pioneer Square location, the meandering labyrinth bookshelves, the levels of book topics rising in ranked stacks, the cards filled with hand-written bookstore clerk recommendations, the nearly hidden basement used book room, and the endless literary discoveries that could be made — all of these things enthralled me at Elliott Bay.

For years after, I visited Seattle during summers and holiday breaks. Seattle’s bookish Northwest culture seemed a kind of attainable heaven to me post-college, when I was living most of my working life in the alienating environment of Los Angeles (symptomatic of this is that nearly all the bookstores I once loved in Los Angeles have now closed, with the exception of Vroman’s, thank god). Part of my semi-annual pilgrimage to Seattle was, of course, time spent at the wonderful bookstores of Seattle, chief among them Elliott Bay in Seattle’s Pioneer Square. And eventually, I had the pleasure of moving to the Pacific Northwest.

Many of my most treasured literary memories have occurred at Elliott Bay. In the early 1990s, I was visiting Elliott Bay one summer, and I realized that the literary magazine in which my first published poem would appear was due to be published soon. I looked for the journal in the display rack, and lo and behold, there it was: The Mid-American Review vol. 47 — featuring the poem “Transfiguration” by Ned Hayes (this poem now included in my published poetry collection Glossolalia). I had found my own first publication, sitting there on a shelf, waiting to be read, at Elliott Bay. 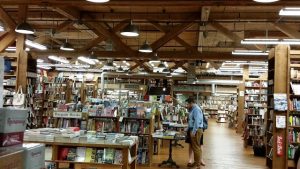 Elliott Bay is such an experiential touchstone for me, that I don’t even think of the geographical location of “Elliott Bay” itself when someone mentions it — many of my bookish friends in Seattle are the same way. I well remember when a friend was describing her sister’s engagement, and how her boyfriend took her to a romantic overlook at “Elliott Bay”, and proposed. During the entire course of the story, I was terribly confused by a marriage proposal happening in a bookstore. Where was there a romantic overlook inside the bookstore? Was there an upper level I was unaware of? Of course, my friend was talking about the geographical feature, not the bookstore.

I also met several of my literary heroes in the reading room in the basement wine-cellar reading room at Elliott Bay. For years, I was a faithful attendee at readings by various literati.  Elliott Bay has hosted so many of my favorite authors I’ve lost count. A few are very bright in my memory. After working for years on a book (Coeur d’Alene Waters) modeled on the work of journalist and National Book Award winning novelist Pete Dexter, I had the pleasure of meeting him at Elliott Bay and spending some time after his reading talking about writing and books. I also had the great pleasure of meeting the late Thom Jones, the Olympia janitor who vaulted to fame with his anguished and precisely chiseled stories in The New Yorker, and became a literary superstar. 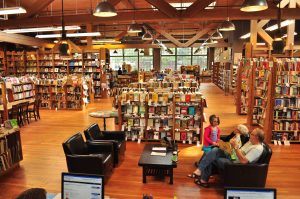 Whenever I’ve been overwhelmed and unable to write, I’ve gone to Elliott Bay for succor and support, and more than not, I’ve found exactly the right book or found the right literary encounter that has shaken me out of my writing morass. In the 2000s, I helped to run a technology startup based in Pioneer Square, and on my lunch hour I was able to sneak away to spend a precious hour reading in the stacks, have a quick bite of lunch in their cafe, and remind myself of my literary calling. In fact, the presence of Elliott Bay near at hand probably was what helped me to produce my medieval novel Sinful Folk during a very intense time in my life. My personal writing history is intertwined with the history and legacy of Elliott Bay.

In fact, all of Seattle’s literary history is bound up with Elliott Bay. The bookstore was first opened in 1973 by Walter Carr, who hired laid-off Boeing workers to help build the shelves in the historic (1890) Globe Building (1st Avenue and Main Street). Then, in 1998, Elliott Bay was sold to Third Place Books owners, who soon offered the store to an employee, Peter Aaron. He took over operations in 1999. 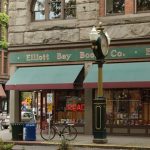 In its 38 years of bookselling in Pioneer Square, Elliott Bay became established as the town’s premier book shop, and since 1979 it featured a popular basement café and in recent years held about 500 author reading events per year. The  Associated Press listed Elliott Bay as one of America’s nine “destination” bookstores. The store was rightfully known as “the heart of Seattle’s literary community.”

Therefore, it was with great trepidation that I heard in 2009 that Elliott Bay was going out of business, or downsizing, or at the very least, changing location (the rumors varied!). All of literary Seattle was shaken by the news that this mainstay of Pioneer Square was leaving their happy environs. It turned out that the rumors were all — to some extent — exactly true. 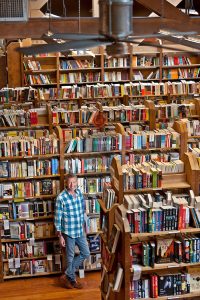 Elliott Bay was on the verge of going out of business, and for years, the bookstore had struggled to make ends meet in their Pioneer Square location. The Bush recession, some negative experiences in Pioneer Square, a lack of parking and an overall lack of people flowing through made the bookstore business very hard. Owner Peter Aaron even thought  he’d have to close Elliott Bay‘s doors for good.

But instead of closing, Aaron found a new location. Elliott Bay pulled up roots from its iconic storefront in Pioneer Square and relocated to an commodious old Ford truck-repair garage on Capitol Hill in Seattle. Thousands of books, disassembled shelves and a staff of 38 were moved across town to a renovated space at 1521 10th Ave. on Capitol Hill. The new neighborhood, a couple blocks north of Seattle University, has morphed in recent years from an area known for nightclubs into one that has a mix of businesses, including popular restaurants like Oddfellows Café, Bimbos Cantina and Boom Noodle.

I must admit that the new location for Elliott Bay is marvelous: sunlight streams through loft-style windows at the front of the store, exposed beams in the 19 foot ceilings catch the light, the ancient wood floors still creak, and the bookstore still feels cozy and meandering (although it’s not quite as labyrinthine as the version in the old location). And the bookstore has been an immediate success in its new location. Elliott Bay livened up a quiet stretch of Capitol Hill between Pine and Pike streets, and the new location has been nicely surrounded by new restaurants and shops.

Aaron has kept the focus of Elliott Bay on four elements he names as key: 1) a welcoming, commodious and attractive space in which to browse, ponder and linger with books; 2) as broad, varied and authoritative a selection of titles, authors and presses as possible (20,000 square feet, 150,000 titles); 3) a comprehensive schedule of author events— more than 500 readings each year; and 4) by far the most important of all, a staff of excellent booksellers—people deeply and passionately engaged with books, who love to share their enthusiasm.

Elliott Bay Book Company is one of my literary touchstones, and I’m happy to share that bookstore experience with my readers! Enjoy! 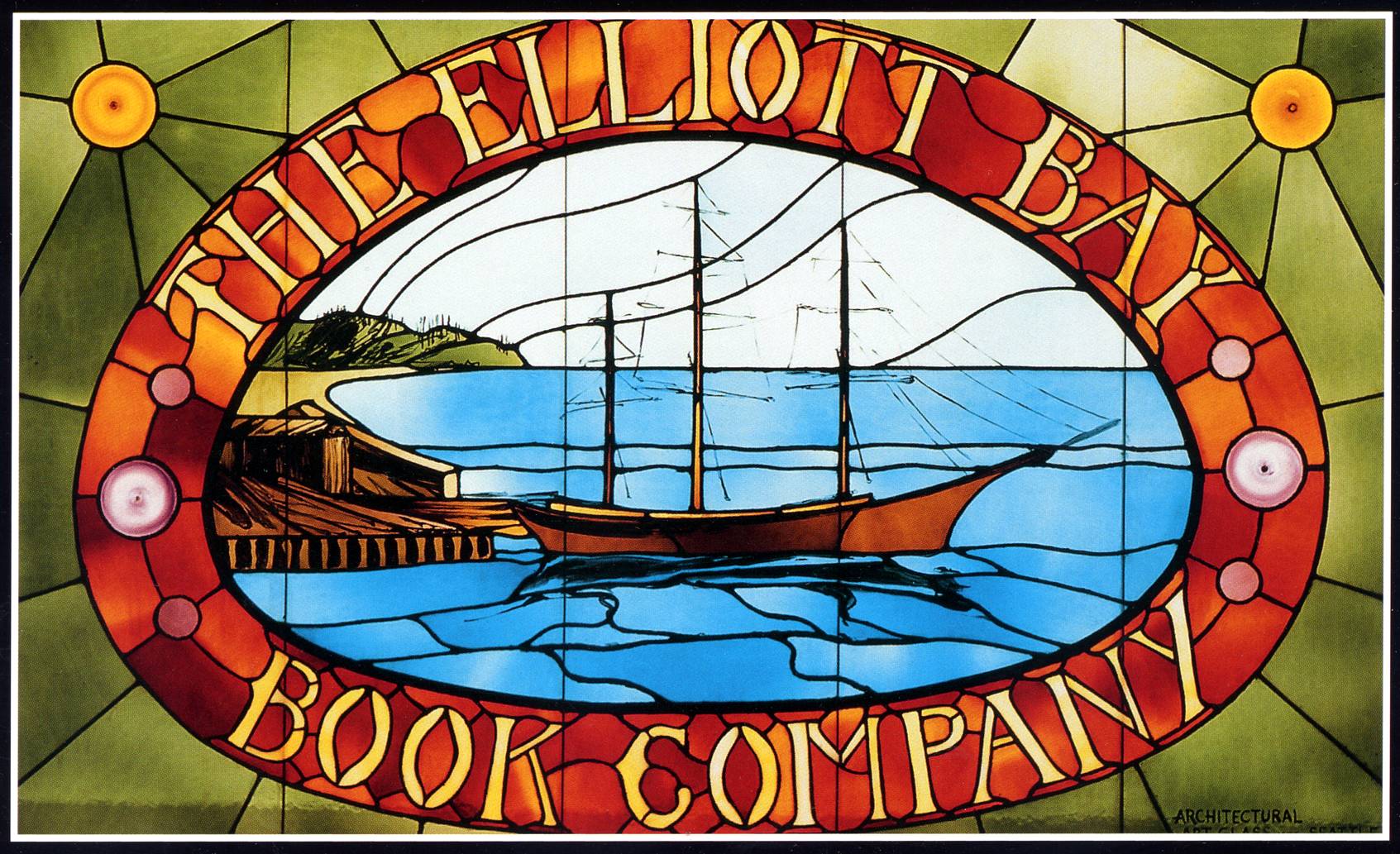