Find my books at Powell’s

In 1990, I was new to the Pacific Northwest. Even in the hinterlands of Spokane though, where I was an undergraduate, rumors of a city of books had filtered out. So on the first Oregon roadtrip with my then-girlfriend, we stopped in Portland and I beheld — for the first time — the vast and amazing Powell’s City of Books in Portland Oregon. It was simply astonishing to see an entire city block converted into a wide-ranging and spectacularly well-organized bookstore.

Time passed bookishly. In the first hour, I felt as if I were momentarily present in a dream-library I’d always wished to visit. In the second hour, I grew convinced that the bookstore never ended — that it was a labyrinth of texts like that found in Umberto Eco’s The Name of the Rose. In the third hour, I was sure I’d been transported to the library of Numenor in Gondor, where Gandalf researches the history of the Great Ring and the origins of Sauron in The Lord of the Ring. Because if you couldn’t find that kind of arcane knowledge in a bookstore of this magnitude and power, where would you find it? I drowned in bookish delight at Powell’s and came up from the experience water-logged with wordy pleasure. 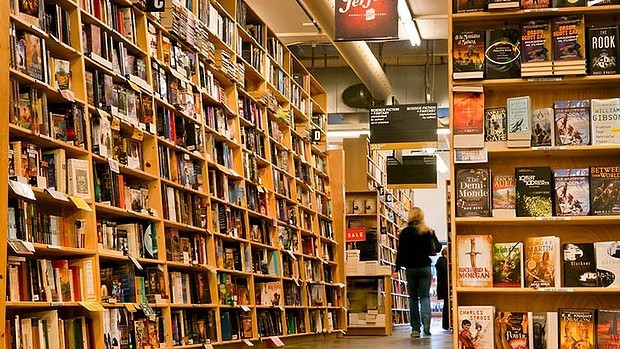 Since that time, I’ve had the pleasure of introducing many other readers to the fabulous experience of Powell’s in Portland. My children now consider a visit to Powell’s to be a mandatory part of their intermittent visits to Portland, and it’s interesting to know what a big part this seminal bookstore has played in their experience of what a bookstore can be. 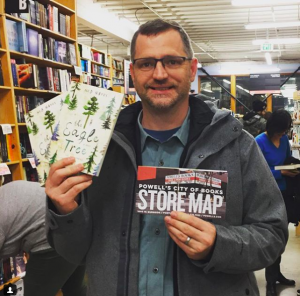 The Eagle Tree at Powell’s Books in Portland

A few years ago, I was so excited to find my own books at Powell’s and to realize that my books had penetrated this literary fortress was a great pleasure. If schedules all align, I’m very excited to do a special reading next year of a new special collector’s edition of my national bestselling novel The Eagle Tree at Powell’s. For me, being part of the Powell’s experience is the pinnacle of literary success.

In fact, the bookstore has become its own kind of amazing cornerstone to the city of Portland as well — it is a veritable beehive of literary activity and community-building. Today, Powell’s now hosts over 500 author events a year, in addition to children’s storytimes, writing workshops, game demonstrations, and book clubs. Powell’s has now grown to employ over 530 people across five Portland-area stores and Powells.com. Their book inventory exceeds two million volumes, which is pretty incredible. I’d like to think that even Amazon took a few notes from Powell’s when they were first starting out in the 1990s. 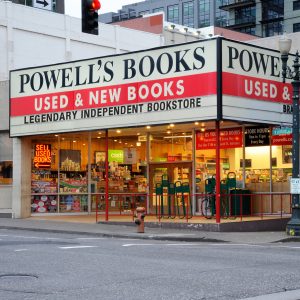 The history of Powell’s is an interesting one. Back in 1971, Michael Powell was encouraged by friends and professors (including novelist Saul Bellow), to open a bookstore. Michael’s dad, Walter Powell, a retired painting contractor, worked one summer with Michael in the Chicago store. Powell’s corporate site says that Walter so enjoyed his experience that upon returning to Portland he opened his own used bookstore. In 1979, Michael joined Walter in Portland, creating a bookstore with a unique recipe that, though viewed as unorthodox, worked: used and new, hardcover and paperback, all on the same shelf; open 365 days a year; and staffed by knowledgeable and dedicated booklovers.

This recipe of old and new together in one vast menagerie of books has been an amazing success, and now it’s being mirrored by many other bookstores I know and love, most especially Elliot Bay Bookstore in Seattle and my hometown bookstores of Orca Books and Browsers Bookstore, here in Olympia Washington.

“My grandfather taught me that our job is to connect the writer’s voice with the reader’s ear and not let our egos get in between. My father taught me not only the love of the book itself but also how to love the business of bookselling.” — Emily Powell, Powell’s owner

Powell’s City of Books is one of my literary touchstones, and I’m happy to share that bookstore experience with my readers! Enjoy!

There is a magical City of Books, found in a rainy metropolis, with skyscrapers of books, pathways of poems, literary labyrinths and alphabet alleys — my fav bookstore: Powell's in Portland. @Powells #books #bookstores