Earlier this year, I recorded a quick little video for Amazon Publishing to post on their public websites to promote my newly bestselling book THE EAGLE TREE. This is a post about what words I chose to use, and why. 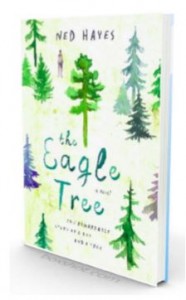 I had the opportunity to describe my new book The Eagle Tree on camera. My book is about a boy named March Wong who lives in Olympia Washington. March is a highly focused young man: he does evince characteristics of people I know and love who are autistic. He cares tremendously about trees and his great interest in trees influences his community in a powerful way.

The Eagle Tree became a bestseller in April, and I was subsequently invited to record a promotional video for the novel. Here’s the video:

(Watch! The video is only 15 seconds long)

I chose my words carefully. Bestselling author Blake Crouch helpfully rehearsed with me at lunch. And the crew, the staff and the director provided much assistance.

Words matter, I kept thinking, the words I use can really matter here.

First of all, you only have 15 seconds to describe your book… you have to pack the entire story arc into just that amount of time. The director of the video mentioned how to heighten the drama in my little 15 seconds – she wanted the drama of my video to be very high!

“What if we said your character is ‘trapped in silence’ or ‘trapped in autism’?” said the director.

I knew she meant well – she just wanted to communicate an extreme sense of what was at stake in the story.

“He’s not silent,” I replied. And that’s true – my character in the book is not silent at all – he is quite voluble when it comes to talking about trees. What I didn’t say is that even if March doesn’t choose to speak, he’s not necessarily “trapped” by that silence.

My character chooses not to talk to many people in the story. He doesn’t feel the need. He finds solace and meaning in silence, far beyond that found in the madding crowd of trivial expression he hears in people all around him. In fact, he occasionally feels “trapped” by people, and he leaves a City Council meeting because of the feeling of too many people around him – an experience that many other people share, from mild to extreme introverts, to those with social anxiety. Some autistic people share this experience too – but not all of them.

What’s even more important is that saying “trapped in autism” reinforces the whole idea that autism itself is a “condition” that “traps” people.

In fact, this idea has been used by some organizations to silence voices they disagree with, and to dismiss the voices of women or adults who are autistic. “Trapped” means that you aren’t part of the general human conversation: “trapped” may even mean your experience is not considered entirely human or entirely valid.

I refused to say that phrase, or to include it as a possibility.

Then the helpful director moved on from the “trapped” word – she wanted me to at least describe my character as “autistic” on camera.

“No,” I said. “I never describe the character as autistic.”

And in fact, I don’t. I never apply a label to my character, March Wong. That’s because I feel his primary identity is that of a person. Not a disability. Not a syndrome or a symptom. He is a person.

He may have difficulty with some things and find other things easier.

But don’t we all?

When I wrote this book, I was just writing from one person’s unique perspective. I wasn’t writing just “about autism” or “about disability” or even “about climate change.” I was merely telling a single human being’s story, with all of its complications, disconnections, uncomfortable disclosures and lack of self-awareness. We all have blindspots,” and March shares that human flaw.

“I’ve never described him as autistic,” I said. “And I’m not going to do it on camera.”

I didn’t want to use the “box” of autism to label my main character. He never describes himself that way, so how could I do so? I did not going to take the liberty of applying a label to him that he has not himself chosen.

I am not on the autistic spectrum, as far as I know, and I can be considered neurotypical. Therefore, I don’t think it’s ok for me just to blithely label someone else with any term they have not named as their own.

Words matter. The fictional portrayals we make of people often influence how we think of people in the real world. Books like Harriet Beecher Stowe’s Uncle Tom’s Cabin and Ralph Ellison’s Invisible Man helped to change the national conversation about race and black Americans, while other books like No No Boy and The House on Mango Street shaped our understanding of the Asian-American and Hispanic-American experiences.

And it’s worth remembering that while my character is “fictional,” there are very real teenagers and very real adult people who are autistic, who aren’t helped by portrayals of their very real and immediate experiences as “trapped” or as a “syndrome” that can be easily labeled and dismissed.

Real-life autistic experiences may not fit in any particular box – even one that I create in an attempt to be helpful. My help is not needed for them. They have their own experiences which may not fall into a label applied by neurotypical people. And they may feel “trapped” by circumstances or by their employment situation or by a myriad number of other things, but it is not my label to apply to their reality and their experiences.

Every person is different. Every person who has different types of neurological wiring is also different. I’d like, in my work (at the very least) to respect these differences and approach people on their own terms and in their own preferred manner.

I hope, in my small way, to be an advocate and an ally for those who are not part of mainstream society. But that starts by not “mainstreaming” everyone and by not putting people in boxes or slapping unhelpful negative labels on people.

Instead, we can become allies and we can advocate for our friends and colleagues by first listening and learning to other people’s real experiences and valuing those experiences as valid expressions of humanity. I’m still learning here.

Won’t you come alongside me, to listen and learn too?

THE EAGLE TREE by Ned Hayes, is now available in print, e-book and audiobook from indie bookstores and from Amazon and Barnes & Noble.

> THE EAGLE TREE is now available for purchase in print, e-book and audiobook