A Review published on Patriot Press by Grace Twomey 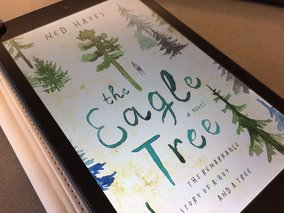 In July of 2016 The Eagle Tree by Ned Hayes had been released. The Eagle Tree tells the story of a young boy named March who absolutely loves trees. After finding out that an extremely rare and old tree nearby has been scheduled to be destroyed, he hatches a plan to save it.

The Eagle Tree seems very reminiscent of the popular middle-grade book, Hoot by Carl Hiaasen. However, Hayes tells The Eagle Tree story from a unique perspective. Ned Hayes draws from his extensive experience working with special needs kids to create a main character on the autism spectrum. March falls fairly high on the spectrum. While verbal, the extent of his speaking capabilities remain limited.

Being a single parent proves to be very hard, but being a single parent of a special needs child proves to be even harder. March often struggles to watch out for his own personal safety when climbing trees. This leads to his mother being accused of not being a good parent despite her best efforts. While March tries to keep a nearby forest from becoming destroyed, his mother tries her best to remain in custody of him.

Ned Hayes’ years of experience working with autistic children helps him to create a believable character on the spectrum. Those who have loved ones struggling with autism or Asperger’s Syndrome may enjoy this unique look into the minds of those they love. Even those unfamiliar with the autism spectrum can still enjoy this book and its unique twisting plots.

​For fans of Carl Hiaasen or those just looking for a good read, this could be just the book. Overall, I would give it a 4.5 out of 5 stars.