Special Preview of a New Novel: The Real World of Jasper Hunter

The Real World of Jasper Hunter 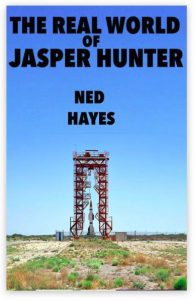 more about The Real World of Jasper Hunter >>

Sunlight seeps out of the edge of the dark sky and leaks across the Black Rock Desert. Everywhere the light touched turns white, the heat of the day taking over the ground. I’ve never watched the sun enter the sky before. It is an astonishing thing to see: colors rise with the sun, blossoming out of its slow ascendance. Oranges, purples, yellows and deep reds. They oscillate out of its orbit slowly, and if I speed it up in my memory, I realize that they are like waves emerging from a rock thrown into deep water.

The colors bleeds into the sky, wavering out of the bright circle of light at the center of the horizon. It is the most beautiful thing I’ve ever seen. A sunrise. I wonder if they have anything like this in the Real World®, behind the goggles where Jamie liked to live. I’ve never been online, but she spent most of her life there.

Serenity, the launch vehicle I named for a spacecraft on an old TV show, rests like an immense skyscraper-sized spear on the makeshift launch pad of the Black Rock Desert hardpan. The sight of Serenity fills me with hope, and with unexpected sadness. I am surprised we have arrived so quickly at the culmination of our plan. Jamie had a plan, and I followed her plan precisely. Until last week, I thought I’d go with her, but instead I am now serving as the rocket launch engineer and ground control supervisor. Not a spaceman after all.

The great work is almost complete, just in time for sunrise. This is the launch window target time that Jamie chose many months ago, back when I was in Los Angeles, before she faked out the police records and stole me from house arrest, before we liberated Alan Nosk’s perfect spacecraft from NASA’s custody.

I turn and peer at the rising sun. Light slides slowly across the desert towards the launch site. I do know that when the sunlight arrives, we’ll be within moments of the launch window. We’re almost ready: the drones and I had been working on this for weeks before Jamie arrived here from Arizona.

5:47 a.m. is sunrise this time of year here at Black Rock Desert, on the playa. We are aiming at just after sunrise. Every time I check, we are exactly on target. Launch window: 00:29:42. Stay on target. Stay on target.

Jamie is already in her spacesuit and loaded securely in Serenity. She gave me the thumbs up before she went under radio silence. Her cockpit is a tiny bubble of metal and glass attached to a gigantic edifice of fuel-filled tanks. She’s strapped in securely to her astronaut seat, resting on top of a gigantic fuel-bomb waiting only for a spark.

The sun is rising higher. The tallest spike on the spacecraft – the tracking navigational antennae – is the first piece to be touched by sunlight. The bright line of light creeps towards us like liquid across the desert floor. The dark spar of the antennae on the spacecraft switches from black shadow into glowing light in a heartbeat. Then the metal of the body of the spacecraft starts reflecting the light. It becomes as bright as a sparkling mirror. Below that glowing spark of antennae, the launch gantry around Serenity remains a colossal darkness against other darkness, the shadow it is beginning to cast reaching all the way out to me, as I move gradually back further to the safe zone beyond the launch site. Almost there: 00:16:32

Now sunlight entirely covers Black Rock Desert. It has become a vast pool of brightness: the white desert light fills every pixel I can see. Every color is now burned away by the brilliant sun. This is the moment we’ve been waiting for. I put the dark goggles on, to protect my eyes from the bright blast, but also to protect me from the glowing sunlight. I do a final count-down: 00:00:10.

I report the results. There’s no negative response from Jamie. All is well. I run them again, double-check my location, nearly a half-mile back from the launch site. I lift the protective cover over the final connection and press the button. The electronic countdown runs through rapid numbers, blinking down, until it stops. 00:00:00.

Nothing happens for a long breath. My heart thumps terribly. I remember the last rocket that I built with Jamie, the one that blew up and lit all of those fourteen houses on fire. A fuel bomb, the one they called a terrorist launch. It looked just like this before it blew to smithereens. That one was Jamie’s fault. What if this one is my mistake?

Ignition. There is a whispering hiss that fills the desert, as if the light itself is speaking. Like ancient words spoke too fast together to understand: a final incantation. The vast sizzle of sound builds a terrible anticipation. Then smoke or steam is blasting out of the bottom of the spacecraft as the compressed liquid bursts into flame. There is a reverberating rumble that feels at first as if it emerged from the distant mountains. The rumbling grows like distant thunder. My teeth chatter from the vibrations of the sound, and now I can see fire growing under the rocket body, white and orange jetting out from a titanic blast furnace.

This rocket hasn’t exploded yet. I can feel my pulse in my temples, in my throat, nearly bursting out of my chest, as I wait again for that terrible explosion. Thump, thump, thump. My heartbeat is in sync with the billowing flames.

Then, between one heartbeat and the next, the ground shakes dreadfully. The world is caving in. The sound is the loudest thunderclap I could ever imagine, rising louder and louder until I throw my hands over the safety ear protection, holding them even tighter to my head, hoping my head won’t burst apart from the terror of the blast. The earth is opening up underneath me, the sky itself splitting apart from the light and the sound. My teeth chatter, my jaw aching with the continuous explosive booms.

The billows of flame and dust grow immense, obscuring the rocket and the launch vehicle itself, and then I can see the tip of the rocket sticking up above the cloud, and then more of it is showing, and then I realize that the rocket is lifting off the ground, and that’s why I can see more of it now. The dark skyscraper on the launch pad rises into the air on a bright tower of flame.

I stare down at my monitor, my sight dimmed and uncertain, still wavering with the after-image of the glowing tower of flame. The rocket seems to be on a proper trajectory. But when I glance upward, the tiny dot of flame seems to be arching overhead. I stop looking at the black and green lights on my monitor and just stare upward at the departing Serenity. For a long time the rocket remains visible, a star against the faint clouds. It is a bright miniature planet moving across the sky, winking out of sight in the dim early dawn, fading into the interstellar objects that surround it.

I know its instruction set. It is a similar instruction set to that I created when I sent the deer’s body back into the woods. I wrote an algorithm for the ship that could be summarized as “Don’t stop moving until something stops you.”

I check the parameters. The rocket is on the right path, it has not deviated from the planned trajectory. If we achieve upper atmosphere, and then space, this rocket and its payload will not go into orbit around the earth. We programmed this ship to blast through the solar system, and use Jupiter as a gravitational slingshot before it unfurls that huge sail to catch the solar wind and ride it out beyond our solar system. It is free.

Eighteen months ago, I didn’t know that spaceships existed, or that I’d be stealing one from NASA’s Ames Research Center in Mountain View, California. Or illegally setting up a launch site in the middle of the Black Rock Desert playa. Or blasting a ship off from Earth to sail through the solar system. I didn’t know any of this would happen. Back then, I also didn’t know what would happen to Jamie, and I didn’t know the truth about Jamie. If you’d told me everything then, I wouldn’t have believed you.

Eighteen months ago, I thought the Real World® was the only world worth caring about. But now I know that there’s a whole world out here of living creatures and things to build and books to read and missions to go on. And spaceships to steal.

Want to read MORE from the forthcoming novel?
Sign up for updates about
<< The Real World of Jasper Hunter >>