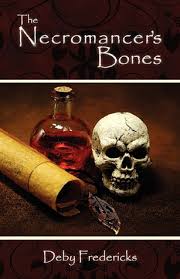 The Necromancer’s Bones is a subtly slow-burning fantasy novel that is set in a unique and creative world. Instead of the same-old medieval English worlds we’re familiar with (from Game of Thrones to Name of the Wind to Tolkien), Fredericks gives us a fascinating Arabic and Chinese-influenced milieu replete with head-scarves, familial strife, political subltety and unexpectedly Asiatic sorcerous twists.

Women and women’s concerns are also at the forefront in this fascinating novel. Chimi is the younger sister who wants to avoid her necromancer calling, while her older sister Shenza is a city magister who hides her love for a leading prince under her mantle of justice. I loved the characters, and I found them quite compelling.

Yet Deby Fredericks puts the lie to the idea that feminine-focused fantasy fiction is somehow less powerful in its plot construction or in any capacity less fully framed in its approach to magic and ideas. The Necromancer’s Bones has a set of conflicted, complicated characters. The story rockets along a clear and interesting arc, and the execution is tight and compelling. The Arabic/Middle Easter milieu adds an original perspective to the often well-trodden fantasy tropes and makes the turns of the story less predictable and more nuanced.

I enjoyed the book very much — the story will be enjoyed by readers who also enjoy Martha Wells Ile-Rein books (The Element of Fire, Death of the Necromancer), and Barbara Hambly’s (Bride of the Rat God).