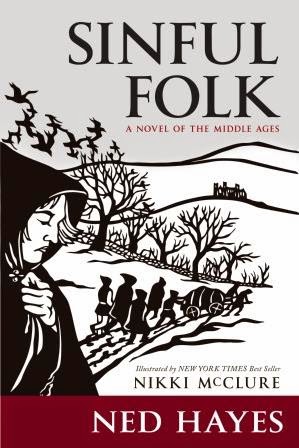 It is the winter of 1377 and five boys have died in a tragic fire. The village of Duns fears this was no accident and vows they will have justice for their loss. The bodies are packed into a cart and a handful of local men set off on a journey that will be both long and dangerous.

Miriam has been living in Duns with her son, Christian, for the past decade. When she arrived, she was being hunted – to be caught would mean certain death for both of them. And so, when the villagers who discovered her assumed she was a man, she embraced the deception. For ten years the people of Duns have seen her only as Mear, a mute man and father. Christian was among those lost in the fire and Mear will stop at nothing to discover the truth about his death. As Mear, she travels the King’s Road alongside the other fathers, listening and learning their secrets. But Mear has secrets of her own – secrets well beyond the truth about her own sex.

Ned Hayes’s latest is superb, guys! I mean really superb! There are so many things I want to note but I’m trying very hard to restrain myself because I think I’d prefer to leave some of the surprises for other potential readers to discover on their own. So here goes!

It’s historical fiction set in 1377 with a truly fabulous narrator. Mear/Miriam has very good reason to hide her identity, not least of which is the fact that we soon discover the villagers’ fear of single women living amongst them. As their travels progress Mear becomes even more afraid of the possible discovery of her identity in spite of the fact that she oftentimes is the one who saves many of them from grave peril.

And it’s Mear’s secrets that really make this a stand out – what she’s running from and why she’s kept her identity secret for so long. Hayes intertwines Miriam’s tale around Mear’s journey, revealing pieces of her past through her own memories while also giving clues through other characters along the way.

Hayes’s tale is wrapped around a true historic event – apparently medieval records do note the deaths of a handful of village children in a fire in 1377 and the villagers’ journey to seek justice from the king. But the twist is even more clever – there’s a second historical note that has inspired this tale and that’s what I don’t want to give away. I will say this, considering some of my recent reading this was a timely one for my TBR.

Sinful Folk has elements of mystery and suspense and an obvious careful attention to historical accuracy. Hayes sets the tone nicely and Mear does all the rest! Historical fiction fans take note, this is definitely one not to miss!