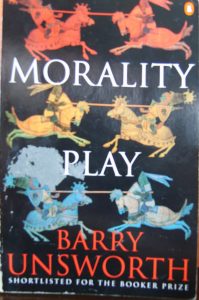 Morality Play, by Barry Unsworth, is a tight taut tale of a troupe of actors in 14th century England who enter a new village and find out about the murder of a local boy. In a twist unusual to their station in the culture and their tenuous place in life, they actually become involved in this local crime.

In fact, they choose to create an original play (which was strange to do in the period) around the crime, in order to put the facts before the local village population. In the time period, this brave attempt to portray the contemporary life — and mysteries — of the village on stage, was strange and provocative. Given the facts of the events, it is close to heresy and treason.

Rapidly, they become enmeshed in a mystery that involves far more than a boy’s murder, and the play they thought they were creating has ramifications beyond this small village — in fact, this drama includes some of the most powerful nobles in England at the time.

The story really plays with the idea that every person is an actor in their own drama. As another reviewer pointed out, this sentiment was expressed by Shakespeare in his famous quotation, “All the world’s a stage, and all the

In this novel, I personally loved the complicated period-appropriate characters. Nicholas, who narrates the story, is philosophical and has strong psychological insights. I also like Martin Ball, who is the head of the acting troupe. The other actors are fully fleshed characters with believable back stories.

In fact, I liked the acting troupe so much, that I gave them a small walk-on role in my own novel of the Middle Ages, SINFUL FOLK. Nicholas, Martin and the other members of the troupe are briefly featured in a scene outside the Monastery, just after my own travelers have been sent out on the open road.

Morality Play is more than a commentary or a murder mystery. Instead, it functions as an analysis of the idea of drama and fakery, of stagecraft and lifecraft, of roles and the masks we all wear. I highly recommend the book.