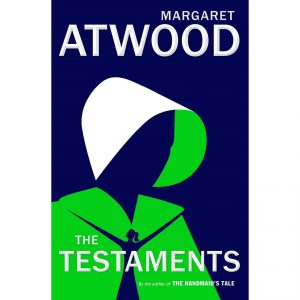 “The Testaments” by Margaret Atwood feels both more prescient and more hopeful than “The Handmaid’s Tale“. In 1985, women’s rights seemed assured and the world described in Gilead was a strange dystopia. Sadly, Gilead seems like a real possibility now. “The Teataments”, set 15 years after the events of “The Handmaid’s Tale,” shows that the Republic of Gilead is a theocracy teetering on the brink of self-immolation.

The story this time around is not just one woman’s inner turmoil and her often-lonely struggle to stay sane in the midst of a life of religious slavery. In “The Testaments”, instead of just the story of Offred, this book features the stories of three radially different women all caught in the same morass.

Agnes Jemima, who was raised to be a compliant Commander’s wife, questions what she knows. The vicious Aunt Lydia describes her past and protects herself by gathering secrets. And Daisy, an anti-Gilead activist, begins a dangerous mission: going undercover as a convert to the faith in hopes of helping to take Gilead down from within. Once again, Atwood has crafted a chilling cautionary tale about the suppression of women’s rights and a society twisted by that destruction.

In our current era, the story has a powerful and terrifying resonance because so many rights have been curtailed, and it is much easier to see how the lines of our society can be easily redrawn by self-interested charlatans using religion to further their own agendas. Freedom is under threat, and “The Testaments” shows us exactly how it happens, and what the consequences look like.

Today is the release of “The Testaments” — a feminist parable for our time and of our time.

Find out more about the cinematic release of the new Atwood novel here:
https://www.margaretatwoodlive.com/