Excited to see this review of my new novel Coeur d’Alene Waters. 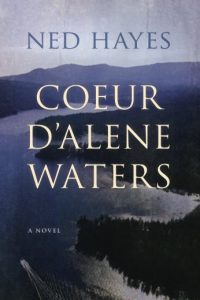 What is it about the Pacific Northwest that leads some into dark worlds of violence and despair? Had one-time north Idaho journalist Ned Hayes made this tantalizing question the centerpiece of his debut novel, he might have only created a derivative retelling of an all-too-familiar serial killer plot. Instead, he takes the plot for this well-written literary thriller from the historical facts of the still-unsolved Sunshine Mine disaster in 1972, and winds it tight around the troubled central figure of Matt Worthson, a one time candidate for Sheriff in Coeur d’Alene.

Worthson, suffering from a broken marriage and a suspect car accident, is pulled into a tangled history of corrupt politics, separatist plots, and powerful interests who control the lucrative Idaho mining industry.  The novel opens with the discovery of the mutilated body of a chaplain who works with the police department, and seems to point towards a local serial killer who is again on the loose. But this tried and true plot soon moves in a more complicated direction, as Worthson’s own motivations and past crimes are brought under the microscope.

The story of the Sunshine Mine disaster itself is told in a flashback that is both compelling and heart-rending, as Worthson struggles with his father’s impending death, and the secrets his father still refuses to reveal about the mine disaster – the truth of which has important implications for Worthson’s investigation.

Coeur d’Alene Waters is a solidly written murder mystery with a haunting finish, reminiscent of the best of Ridley Pearson or the early work of fellow Washington writer Jess Walter.