I have a confession to make. Years ago, when I lived in Seattle, I’d take dates on the ferry out to Bainbridge Island, where there’s a lovely little walking district with shops and bars and an absolutely fantastic little bookstore called Eagle Harbor Books. I took dates there to test if they’d have a natural gravitational pull towards the bookstore or not. If gifts or drink or food was a more powerful draw to them than books, then they probably weren’t a fit. When I finally met someone who said she’d done much the same thing to me — that she wanted to see if I enjoyed Eagle Harbor Books, then I knew I’d met exactly the right person. 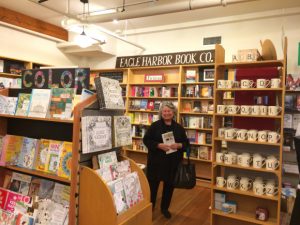 Eagle Harbor Books is this beautiful little discovery in the middle of Puget Sound. Reached mostly by ferry from the larger city of Seattle, it’s perched in such a way that you can see the saltwater from the store. Shelves are filled with sea lore, and other shelves are filled with Northwest books. Standing here, you feel like you’re walking into a David Guterson novel — and in fact, perhaps you are, because Guterson lives on this island, along with a number of other writers. Among them are such notables as Rebecca Wells, known for Divine Secrets of the Ya-Ya Sisterhood.

“We are very lucky on Bainbridge Island–we have some amazing local authors in our community,” Jane Danielson says. She’s the new owner of Eagle Harbor Books — she and her husband purchased the bookstore in 2016, and so far they’re doing a bang-up job revitalizing this wonderful little bookstore at the heart of the Puget Sound.

In the six months since Jane and Dave Danielson bought Eagle Harbor Books (in mid-2016), the store has seen a complete revitalization of its inventory and the beginning of several new community partnerships and event series. The Danielsons have added some 6,000 titles to the inventory at their 4,200-square-foot new and used bookstore.

Fortunately, they aren’t starting from scratch in re-vitalizing Eagle Harbor Books. The Danielsons have a lot of history to build upon. In 1969, “Betty’s Books” opened on Winslow Way with 500 square feet of book selling space. Forty years later, Eagle Harbor Books had expanded to nearly ten times the space, and had become a literary destination. Writers from around the world read here regularly — some even come by boat. Olympia writer Jim Lynch, who I know a little bit, sailed in one evening on his book-tour-by-boat a few years ago (WSJ link) and of course Eagle Harbor Books was high on his itinerary. 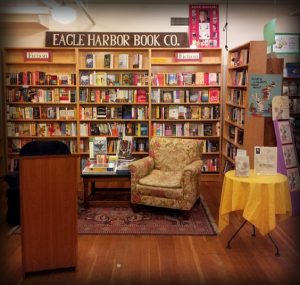 There’s one big innovation that the new owners of Eagle Harbor Books have made which is very exciting to me. The Danielsons have added a Teen Advisory Board program. This is a pretty interesting way of engaging young people in books. Teenagers can sign up to receive free advance copies of YA books and write reviews of them. The reviews are then posted in the store and online. Their voices matter at Eagle Harbor Books. Now that’s a great way to give young people a voice in literary culture!

Now when I visit Bainbridge Island, I’m not checking on my date’s reaction. Instead, I just make a beeline for the bookstore. And if anyone’s up for following me, you can find me back in the corner, thumbing thru the latest David Guterson or Jim Lynch. Whether you you sail in, take the big Seattle ferry or even drive the long way around (thru Poulsbo), it’s worth stopping to browse at Eagle Harbor Books, it’s a gem of the Puget Sound!

Eagle Harbor Book Company is one of my literary touchstones, and I’m happy to share that bookstore experience with my readers! Enjoy!