I was on a bus in Seattle when I first read a book by Tim Powers. I’d picked up a ratty paperback of Expiration Date in some used bookstore’s science-fiction section. The Edison references looked intriguing, and that was enough to hook me. However, as I read deeper into Expiration Date, I found myself enthralled and terrified. I found the world around me — outside the book — to be transformed by a hallucinatory haze, and I almost threw the book down, unable to finish, both horrified and intrigued. I had nearly forgotten the effect that finely woven words could have on one’s psyche. Yet here I was, after all these years as a reader, horrified by what I was reading, and unable to tear myself away from this vertiginous world of ghost-eaters, beheaded parents, street children with preternatural sensibilities, and re-animated half-dead corpses.

The magic that Tim Powers taught me again was that if you describe a world with deep care, profoundly accurate historical touches and artful verisimilitude, it becomes nearly impossible to distinguish that world from our own. When you then take such a world, and begin to add sorcerous or fantastical elements, readers will follow you down that terrible rabbit hole to the ends of the imagination. Powers terrified me: he wrote authentically about deeply disturbing things. For a few years, I didn’t dare to pick another Powers book up. He was good, but I wasn’t sure I wanted to enter that Twilight Zone experience of unreality again.

Yet when I did finally pick up another Powers book, I was enthralled in a completely different way. I found myself picking up Tim Powers new DECLARE, a precisely grounded story of Cold War spying, that happened (of course) to include sacrifices to ancient demons, infection by preternatural forces and arcane knowledge that permeated the world of British espionage. Again, it was so perfectly grounded in the real world that it was impossible to argue with any of the Cold War descriptions, the spy activity, the double-crosses and the Berlin escapades. The otherworldly elements, when they occurred, were described with the same precision and the same sense of reality, which made them even more overwhelmingly real.

Once I finished DECLARE, I read it again. And I again. I was studying it, trying to unpack how Powers had performed these magic acts. This was a revelation to me: the manner in which Powers had so carefully woven together authentic historical events, real locations and well-grounded historical figures (Kiim Philby and other well-known personages appear in the novel), alongside mind-bendingly unreal occurrences and bizarre stories of assaults on Noah’s ark and interactions with ancient desert djinn.

After that seminal experience with DECLARE, I found every other Powers book I could and read them assiduously. I read On Stranger Tides, and found it a maddeningly well-written pirate yarn, again drawing on deep wells of history. I read Last Call, and sank without complaint into a dangerous and magical world of card-reading and Las Vegas shenanigans and murdered gods’ children. These three — DECLARE, Stranger Tides, and Last Call — were better by far than any other books I read in the years I read them (and I read between 40-75 books a year). 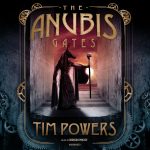 I read The Anubis Gates, and enjoyed this yarn immensely. In this book, Powers skill as a historical novelist really comes to the forefront. This is the first time-travel book that took seriously the toxic after-effects of time-travel. The story also immersed its characters deeply in England of the late 1600s, and found ways to weave threads of genuine history in among the storytelling. This was Powers’ fourth novel, and The Anubis Gates won the Philip K. Dick Award and was nominated for the Locus and BSFA. Once again, Powers found the interesting elisions in history and chinked those gaps with supernatural possibilities. In the Anubis Gates, he came up with the idea that the birth of Romanticism in the early 1800s coincided with a group of Egypt-worshipping occultic magicians. Once again, a brilliant invention that almost seems plausible.

However, since I’d read Stranger Tides and DECLARE, The Anubis Gates didn’t have quite the impression on me that it did on other readers. I went on in my hunger to know Powers writing. I read Powers early SF novels such as Dinner at Deviant’s Palace, and saw the same hand at work, but in a slighter way. He hadn’t yet grown his historical chops or his ability to play with language and character as deeply. Yet even here, the same careful precision was evident, the same themes played out. I deeply enjoyed his older novel, The Drawing of the Dark, and this story of magic and beer was a medieval lark.

Yet by this point, I was almost getting tired of Powers. I felt I’d figured out the games he played. I knew the game and the patter.

Then I found his often-forgotten masterpiece The Stress of Her Regard. And I found myself again terrified, enthralled and horrified by the evident reality of what he was describing. Powers had managed again to pull me under his hallucinatory spell. Stress of Her Regard was, by far, the best vampire/revenant book that I’d ever read. It was a masterstroke of literary innovation as well, with Lord Byron, Percy Shelley, Mary Shelley and other beloved personages from English literature striding the page, and revealing their unholy pacts with otherworldly creatures. Stress of Her Regard became my favorite book for several years.

A few years after reading Stress of Her Regard, I began writing in earnest myself, and I found myself drawn back to Powers DECLARE, learning again from the master how to create a world that was tied so closely to our world of reality as to be indistinguishable. When I completed the first draft of my own novel WILDERNESS OF MIRRORS, I hand-wrote a long letter to Tim Powers, and explained to him what an inspiration he’d been to me over the years. Then I was so bold as to ask him if I could possibly use some of his DECLARE ideas in my novel, as my story of the War on Terror had been inspired by his story of the Cold War.

Powers was kind enough to write back, jauntily telling me he thought the idea of planting a few “easter eggs” to his books in my novel would be fun, and giving me full permission to tie our books together. He was also quite willing to read an early draft. Both of his comments were a great encouragement to my work, and I moved forward with a few additions to WILDERNESS OF MIRRORS that would show the astute reader that there were connections between the books below the waterline. I even placed a subtle easter egg in the book that referenced one of Powers’ principal characters in DECLARE.

WILDERNESS OF MIRRORS attempts to follow Powers model of finding gaps in history and filling them with imagination. So in WILDERNESS OF MIRRORS, I combine both deeply researched historical knowledge about the Middle East, China, the War on Terror, and the history of the CIA with a fantastic and otherworldly story about Chinese spirits of the air—known as tian-long —- and their interactions with human beings.

In the end, my desire is to produce a literature which is truly multivalent and goes beyond typical “spy” or “supernatural” writing into the kinds of haunting territory charted for us by Pynchon, Powers, and Powers’ old friend Philip K. Dick.

I’m happy to tell you that WILDERNESS OF MIRRORS is coming out in 2020 (the 15th draft of the novel was finally picked up for publication!), and it’s  due to Powers inspiration that I completed this monstrosity of a novel. Powers has been a great inspiration to me over the years, and I wish him all the best on his leap-year birthday.