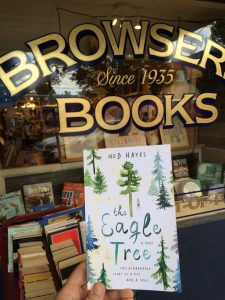 Read my books at Browsers Bookshop

When I moved to Olympia Washington in 2003, I had no idea that this was the town in which my bestselling novel The Eagle Tree would be set, and I had no idea that I’d gradually fall in love with this city, establish an arts magazine that extolled the wonders of the local arts scene, and find such a supportive community of fellow artists, writers and creative souls here. Back then, the city was a little funky, still dealing with the hangover of being America’s first “grunge” capital (birthplace of Nirvana, K-Records, and Riot Grrrl), and the recent shut-down of its namesake brewery.

One of the funky experiences was a little downtrodden used bookstore on the edge of downtown. Browsers Bookstore had been there since 1935, but in recent years the cover had been worn, the spine split, a few pages were missing and there were dust on the shelves. I loved it.

Here in this little used bookstore, I could find a nearly-forgotten old academic tome on Milton, an acid-stained leftover Hunter S. Thompson from the 1960s and a cheap Stephen King or Tim Powers paperback. You had to be willing to brave the netherlands of used bookstore back-shelves, but if you dug deep enough, you could make serendipitous discoveries.

In the mid-2000s, I left Olympia for a few years for a graduate fellowship, and just a few short years after my family and I returned, Browsers had a bit of a resurrection. A wonderful new owner — Andrea Griffith — had taken ownership of the bookstore. She had big plans!

Over a two year period, Andrea gradually transformed the bookstore into a shining jewel — a pocket bookstore where a revitalized and fully used upstairs buzzed with the sound of book discussion groups and writer confabs, while downstairs freshly organized shelves groaned under the weight of face-out new editions, featured new releases and special introductions to local authors and literary luminaries. Andrea proved to have extraordinarily well-refined taste in books, and her picks meet readers right where they need a literary jolt. Now Browsers Bookshop wasn’t just about used books and unexpected finds, but instead showcased the best of brand-new Northwest reading alongside the pick of world fiction and non-fiction. 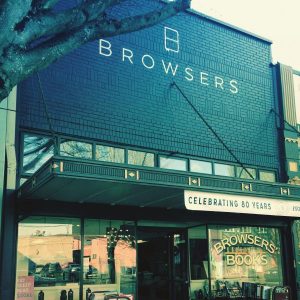 Browsers has a wonderful history, and it’s lovely to see Andrea build on that history. Browsers Bookshop has been in downtown Olympia for 80 years. In that 80 years, four different women have owned the store. Browsers originally began in Aberdeen in 1935 as Anna Blom’s Book Shop. Anna was a Russian Jewish immigrant, born in 1884. She was self-educated, well-read and intelligent. After she divorced and with two young children, she relocated her bookstore to Olympia on the advice of the Washington Supreme Court Judge Walter Beals, who thought Olympia might better support a bookshop during the Depression.

According to Browsers‘ website and conversation with Andrea, Anna Blom’s Bookshop was first located on east Fourth Avenue, about three blocks east of Capitol Way. In 1968, Anna sold her shop to Ilene Yates, a former schoolteacher who changed the name of the shop to Browsers and eventually bought the building where Browsers is now, 107 Capitol Way. The building was for many years a tavern and needed quite a lot of work in order to make the transition from bar to bookstore. Only the front half of the shop was used and when Jenifer Stewart, one of Ilene’s employees, bought the shop in 1985, she worked to renovate the back half to also house books. Jenifer raised her two daughters while running the shop for nearly 30 years. Andrea Griffith took over in late 2014. As Andrea writes, “Browsers continues on, providing just the right book to just the right reader.” 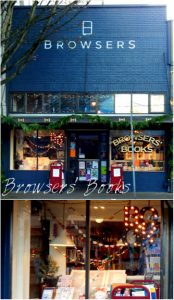 In 2016, I was so excited to partner with Andrea to host my very first launch event for The Eagle Tree, which featured actors and readers like Amy Shepherd, who has been seen on stage at Harlequin Productions, Olympia Family Theater and the Broadway Center for the Performing Arts and Clarke Hallum, recently seen as “Wilbur” in Olympia Family Theater’s production of Charlotte’s Web and known for his starring role in A Christmas Story at 5th Avenue Theater in Seattle. The event also was the first big author reading for the revitalized and re-born Browser’s Bookshop in Olympia. I’m happy to report that there was standing-room only at the event.

Subsequently, many other authors and readers have been fortunate to experience Browser’s Bookshop warm hospitality and welcoming audiences, including such literary luminaries as Nancy Pearl, Maria Mudd Ruth, Jim Lynch and Nikki McClure.

Browser’s Bookshop is now truly one of the best bookstores on the West Coast. I’m excited to feature Andrea’s beautiful place as the first in a new ongoing series about my favorite bookish places.

Browser’s Bookshop is one of my literary touchstones, and I’m happy to share that bookstore experience with my readers! Enjoy!

Find my books at Browsers

Bookstores are my jam — my refuge in the storm, my nesting place on a rainy day, and my favorite places in the world. Let me tell you about Browser's Books in Olympia — one of my favorite bookstores. @BrowsersBooks #Books #bookstores https://t.co/WnFciyr9NA pic.twitter.com/QotqMQLjtx