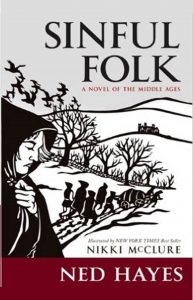 Rating: ★ ★ ★ ★ ☆
Obtained from: Historical Fiction Virtual Book Tours
Read: October 19, 2014
A terrible loss. A desperate journey. A mother seeks the truth. In December of the year 1377, five children were burned to death in a suspicious house fire. A small band of villagers traveled 200 miles across England in midwinter to demand justice for their children’s deaths. Sinful Folk is the story of this treacherous journey as seen by Mear, a former nun who has lived for a decade disguised as a mute man, raising her son quietly in this isolated village. For years, she has concealed herself and all her secrets. But in this journey, she will find the strength to claim the promise of her past and find a new future. Mear begins her journey in terror and heartache, and ends in triumph and redemption.
═══════════════════════════ ❧  ═══════════════════════════
Author Ned Hayes was entirely unfamiliar to me when Sinful Folk arrived in my mailbox and I’ll be honest, I didn’t really know what to expect from the book when I cracked it open. All I know for certain is that I was pretty ticked by the time I finished chapter eight.
Now before you jump down my throat, realize context is everything. I began reading Sinful Folk in August when I’d landed an excerpt of the novel in nationwide contest. An excerpt that only included chapters one through eight. Do you see what I’m getting at? If not, allow me to spell it out for you. I was hooked on this piece from page one and wasn’t exactly thrilled at only having part of the novel at my immediate disposal.
For two months the story hovered on the edge of my imagination, but thankfully, Sinful Folk turned out to be worth waiting for. I actually reread the opening chapters and finished the entire novel in two days, but that’s neither here nor there. What matters is that the delay and anticipation didn’t outweigh my ultimate admiration for Hayes narrative.
First and foremost, I liked the tone of the piece. It’s dark, heavy and desperate. Everything I’d imagine life in the fourteenth century to be. A lot of authors have a tendency to romanticize the era and I really appreciated the edginess of Hayes’ prose especially when you consider the material he covers over the course of the story. There’s a lot more in these pages than the jacket suggests – suspicion, anti-semitism, revenge, etc. – and here again, I think the layers and subplots bring a very authentic level of drama to the story.
Mear is also worth noting. Her situation and lifestyle allow her to be a somewhat androgynous narrator. At times she feels masculine, at others feminine and I thought it really interesting to see that voice develop as she came into her own. It’s not unusual to see a character evolve, but it isn’t every day that an author is so creative in illustrating that transition.
Sinful Folk is heavy reading and covers a substantial amount of historic material. There were a couple moments that I found almost overwhelming, but even so, I consider the time the time I gave this piece well spent and look forward to reading Hayes again in the future.
═══════════════════════════ ❧  ═══════════════════════════

The good, the bad, the virgin, and the harlot: no one is spared, all go rose-spattered with plague lesions. I see no sense, no judgment before doom strikes. Death takes us all with the black malady or the sweating sickness, or the white blindness or the winter croup, or the crops failing or bitter water in our mouths.