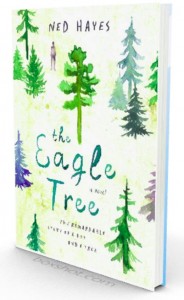 I was very happy to see this interview with a local Olympia arts journal appear recently in print. I’ve received permission to re-print the author interview here on my site.

How did the idea of THE EAGLE TREE come to you?

Years ago, I taught a variety of children who were not neuro-typical. This means that they had a variety of unique and interesting perspectives on the world. One young man especially stayed in my mind for many years. I was inspired by his unusual point of view, and the very hard work he undertook to control what he saw as distracting or destructive behavior and to connect with people around him. I admired him greatly, and I hope a little of his voice is here in this book.

Just two years ago, a writer friend of mine here in Olympia introduced me to the real life “Eagle Tree” back in the woods, and the idea of this solitary amazing tree came together in my mind with the young man I knew years ago. The story emerged organically from that catalyst.

“The idea of this solitary amazing tree came together with the young man… the story emerged organically from that catalyst.” — Ned Hayes, author of The Eagle Tree

The real-life “Eagle Tree” exists then. How much else of the story is grounded in your real life in Olympia Washington?

Well, it’s worth noting that for the sake of the story, I moved the real life Eagle Tree all the way across town from the Evergreen State College – where it is really located – to the east side of Olympia, where I live. But there are many wooded areas on this side of town as well, and I think the Eagle Tree could easily be located here. So the geography of the story is somewhat misaligned with reality, but only slightly.

However, the story is very grounded in the Olympia I know and love. That’s why I’ve made sure to include Olympia institutions like “The Procession of the Species,” the United Churches (a real church here in town), and a unique school we have, the Olympia Regional Learning Academy (ORLA). In my story, March attends ORLA. In real life, he probably would be in a mainstream classroom at a public school, but again, for the sake of the story, certain changes were made to the fabric of reality!

Right – one critical piece that I didn’t change is the fact that the LBA Woods here in Olympia were in fact slated to be bulldozed for a housing development. I wrote this novel when this was still on the books as a development. The woods were going to go.

Yet a group of local citizens came together and just this past year convinced the city to reserve the area as a wooded reserve. This wonderful group also pushed forward a local Parks initiative which will expand and preserve wooded areas in the City of Olympia. I take a walk in the woods nearly every day, and I am so grateful to this dedicated group for their tireless efforts. I had to include these woods in the story, and I am so glad that fiction became reality.

I think March Wong would be very happy as well!

“March is a human being, with the complexities and complications of our shared humanity…. I don’t think it’s helpful to apply some sort of label to a person.”
— Ned Hayes, author of The Eagle Tree

In the novel, March, your narrator, is called “aspy” by someone who is bullying him. Later in the story, the newspaper states that he is a “disabled young man.” How would you describe March?

March is a human being, with the complexities and complications of our shared humanity. I believe I’ve accurately reflected how some people would see March. But I don’t think that’s an accurate reflection of how March sees himself.

I do think that it’s likely that March is on the autistic spectrum, but I know many people who are either on the spectrum or have other non-typical behavior, and I don’t think it’s helpful to apply some sort of label to a person. He may be different than many people, but that’s not to say his perspective is not equally valuable or equally valid.

I think it’s enough to say that March Wong is a human being, and let people discover for themselves how much they identify with his experience or find his perspective new and different.

“I think it’s enough to say that March Wong is a human being, and let people discover for themselves how much they identify with his experience or find his perspective new and different.” — Ned Hayes, author of The Eagle Tree

There’s one difference that you never explicitly name. March, by his very name, is an Asian young man. Why didn’t you specifically emphasize this identity as a plot point? 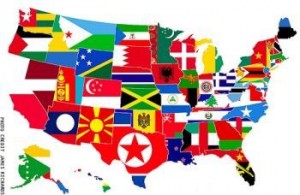 Again, March Wong is a human being. That’s his primary and most important identity.

March happens to be focused on trees and his attempts to find a place in his community and that’s the story I’ve told. Another writer might have told a different story about March Wong.

Sure, March is an Asian-American young man, and he explicitly is choosing the more “Asian” part of his name as his public identity. That’s part of the story: March is discovering and naming who he is in relation to other people.

I think it’s vital to create fiction that has fully embodied human beings of various national origins and skin colors and identities. It is often through fiction that we see ourselves most clearly, and we need to start hearing all voices and all lives as fully embodied, rather than stereotypical “cultural activists.” People who are not of European origin do not exist on the margins of the American story – they are the American story.

If we don’t do this – if we just create and emphasize Euro-centric white characters – we do a disservice to our readers and we fail to enrich our culture and understand our national story.

“I think it’s vital to create fiction that has fully embodied human beings of various national origins and skin colors and identities. It is often through fiction that we see ourselves most clearly, and we need to start hearing all voices and all lives as fully embodied…”
— Ned Hayes, author of The Eagle Tree

The story is about March’s self-discovery and maturation. In that regard, it is a classic coming-of-age story. How did you find a new approach to that classic form?

I’d like to think that I’ve been honest to March and shown respect for his unusual perspective, and this point of view gives us a radically different set of insights into that time of change. Many classic coming-of-age stories, from J.D. Salinger’s Catcher in the Rye to WONDER by R.J. Palacio to Jim Lynch’s The Highest Tide have times of introspection and explanation to the reader about how important and meaningful the changes are to the main character and what it all means. In fact, Catcher in the Rye’s title is taken from just such a reflective and contemplative section.

March’s story, in contrast to that type of introspective story, contains almost none of that “explanatory” material. That’s because March himself doesn’t overtly explore himself in that way. By removing the explanation of what happens, I think I’ve followed the even-more-classic writing dictum of “show don’t tell”, and I’ve been true to March’s natural predilection to experience reality and not indulge in flights of fancy or flights of imaginative exploration. He tends to stay grounded in a certain reality. And since you mostly just experience what he experiences – even on the last page – the reader must draw their own conclusions about what March is experiencing and what it all means.

It may be a coming-of-age novel, but how that works and what it all means is left as an exercise for the reader.

“[The Eagle Tree] may be a coming-of-age novel, but how that works and what it all means is left as an exercise for the reader.”
— Ned Hayes, author of The Eagle Tree

The experiential nature of the story is clear, but you do reference at least one imaginative artist – Annie Dillard. Tell us more about why Dillard’s words are included.

In the 1990s, I immersed myself in Annie Dillard’s work. In fact, when I applied to graduate schools, I chose Western Washington University in Bellingham because she taught at Western for some time, and she had also published several books set in Bellingham. I wanted to follow in her footsteps. 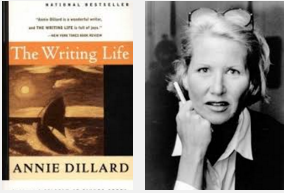 What Annie Dillard does so marvelously is to reflect on the beauty of nature and the mysteries of science without either softening the edge of the transcendent nature of our experience or dumbing down the science.

Pastor Ilsa in my book is a reflection and communicator of Dillard’s vision in her life. Because March is not that reflective on an overt level, Ilsa is my way of reflecting on March’s story and demonstrating that this very human ability to transcend is very much a part of March’s reality.

I know that March himself would not seek out Dillard – she is not by nature his kind of writer – but I felt that giving him access to her perspective might wake up a new approach or a new desire in him. And in fact, it did, and March took action based on that reading of Dillard.

I don’t know if I’ve followed in Dillard’s footsteps here, but I hope that I’ve honored her work and influence in this story.

Now that March’s story is published, what other stories do you plan to tell? What other characters will you be bringing to life?

I have a habit of challenging myself to tell stories that are removed from my personal experience and that stretch me as a reader and as a writer.

My previous novel Sinful Folk was written from the viewpoint of a cross-dressing woman, who is living in the 14th century as a serf. THE EAGLE TREE is, of course, written from the point of view of a fourteen year-old who is not neurotypical. I think voices from other times, places, or worldviews show us ourselves in a new light and allow us to grow from that experience.

I’ve been writing first drafts of several different stories recently. We’ll see which one blossoms and grows into a new novel. But you can rest assured that I’ll keep writing stories that provide unique and different perspectives.

“I think voices from other times, places, or worldviews show us ourselves in a new light and allow us to grow from that experience.”
— Ned Hayes, author of The Eagle Tree

THE EAGLE TREE by Ned Hayes, now available in print, e-book and audiobook.

> THE EAGLE TREE is now available for purchase in print, e-book and audiobook