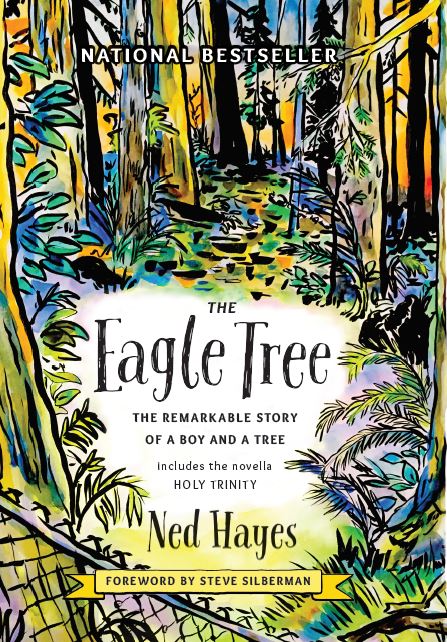 The Eagle Tree by Ned Hayes is visiting the White Salmon Valley Community Library in October 2022. The award-winning novel The Eagle Tree will be featured in the “Everybody Reads” book program created by the local library system program. The program is called KOOBDOOGA (“a good book” backwards) which endeavors to create more dialogue and community through the sharing of a good book.

“We are very excited to have our community read The Eagle Tree this year, said Ruth Shafer, services manager at White Salmon Valley Community Library. “The story is vital and alive – this important novel addresses climate change, environmental awareness and neurodivergence, all set against the background of the Pacific Northwest. We felt that this was the perfect novel for our reading community at this critical time.”

The Eagle Tree is a story about perseverance, community and celebrating our differences. Lauded by nationally ranked writers as Temple Grandin and Steve Silberman, the book has been performed on stage and has already been optioned for film. The Eagle Tree is a national and international bestseller, translated into multiple languages. Upon publication, the book was nominated for the Washington State Book Award as well as for a variety of young adult book awards. The bestselling audiobook was narrated by actor Will Ropp, recently featured in the films The Way Back with Ben Affleck, The Fallout and Silk Road.

The Eagle Tree is author Ned Hayes’s third published novel. The story centers on the adventures of March Wong, an Asian-American young man on the autistic spectrum. March has an unyielding passion for trees. When he discovers a dazzlingly large ponderosa pine tree, he can’t resist the urge to climb it. When March then learns that his beloved tree is slated to be cut down, he rallies his community of Olympia, Washington. March’s quest re-connects him with his community and changes his world.

Bestselling author Steve Silberman crafted a glowing foreword to the commemorative hardcover edition of The Eagle Tree, in which he wrote: “It is the special, magical quality of some precious books that they seem to contain the whole universe in miniature,” and went on to describe the main character of March Wong as “like a teenage Walt Whitman, seeking communion with the ancient magnificent beings that tower over his landscape.” This sentiment falls beautifully in line with White Salmon’s KOOBDOOGA program and its founding desire to bring their Northwest community together around the communion of books.

KOOBDOOGA was established by the White Salmon Valley Community Library and the Friends of the Library. The program was created in 2015, where the very first book featured was Short Nights of the Shadow Catcher by Timothy Egan. Koobdooga has gone on to feature a variety of bestselling books such as Boys in the Boat by Daniel James Brown, Danger Close by Amber Smith and A River Lost: The Life and Death of the Columbia by Blaine Harden. The books chosen each year are always Pacific Northwest focused and are also accompanied by art works and events hosted all throughout the month of October which are inspired by the chosen book.

One of the special events accompanying The Eagle Tree this year will be a panel discussion with people on the autism spectrum. Hayes has worked closely with the library system to ensure that the voices of people with autism are appropriately heard and acknowledged at the event. “This was extremely important to me.” says Hayes, “This is exactly the kind of work that I hoped my story would help do: foster more inclusive discussions in the world.”